Daily we encounter intrusive signs -- signs that have the intent to show possession, bring us into their sphere to sell us something, their services or products, or themselves.  Signs give us direction, warn us of danger, and sometimes a well-intentioned sign - innocently made - is an unexpected intrusion.  Such an event occurred for me at a crossroads not far from my home.

There's a 'little stream that quietly runs through,' and a culvert that disappears under the road after passing by a wide, pie-shaped section of sloping and rocky land.  The intersection divides a residential area with a through street; its  destination a shopping center.

On a lovely spring day many years ago, I noticed there the fresh red soil and weedless mulch surrounding small, beautifully landscaped plant groupings.  Thereafter, each time I passed, there appeared some other bush or plant in bloom, azaleas, a spreading fern bed by the creek, daisies in summer, or a berried nandina in winter.

I began looking forward to this oasis of shading and color as I approached; to anticipate the seasonal changes, the drooping leaves and glistening flowers on a rainy day, or a sprinkling of light in the sun, its shape and texture enhanced once with a rare covering of snow. I never thought to take a picture then.  When would I have done that -- in which season? -- of which bloom?  -- for whom?

The lovely scene became a quick and quiet haven in my life, a known surprise to halt a busy mind.  No word from me described it to another person. Although I seldom left my car, I sometimes parked -- watched for butterflies -- smelled the jasmine -- listened for bees, 'and beetles.'  It was a happy spot and it was mine.  For months I indulged my imagination with foolish thoughts of  fairies scampering gleefully about as they worked their magic 'at the bottom of our garden.'     'Well, they do!'

One early spring day the spell was broken.  On my way to check off a long list of errands, I passed my  old corner, expecting to see azalea blooms, forsythia, maybe a low covering of purple vinca.  Instead a large wooden sign drew my attention, BOBBIN MILL GARDEN CLUB in large block letters.  It was a sturdy sign on thick wooden posts.  Note: journal 01/09/2014 entry

Not only did the symmetry change, but in my musings, I envisioned the nursery flats with their little white markers and the root-bound shrubs in black cans.  I saw the plastic bottles of chemicals and the bales of pine straw and bark nuggets from other places, bringing their foreign seeds and pests to invade our corner of the world.

I grew to reject those thoughts, but when I passed the corner, I didn't like myself much.  I should have been able to appreciate the significance of the sign and look beyond it. I do understand the contributions local garden clubs have made to  Athens, and their connection to our history.  But I have become a viewer of signs and marks everywhere; distractions all from the beauty of nature, the strength of faith, and the joy of whimsy. 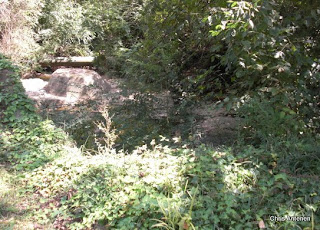 In the same way that my imagination expanded the importance of those moments of reverie, so the flora grew -- and grew -- and now the vale has lost its vivid hues. The sign is gone from the scene, and only a few pale, ubiquitous blooms and the dark green of neatly tended overgrowth remain.  The shades of green and paths of stone are evidence  of care. Are the fairies still residing there?  Is the garden club its hidden caretaker? 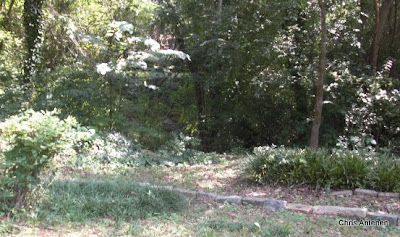 In spite of my disappointment, I refuse to abandon thoughts of the fairies.  Do they rest now in this plot's cool and shady foliage?

Do they await me in some newly colorful place?


Or, following some cruel edict from the mythical monarchs who govern all the wee ones, did they disappear with the blooms they nurtured, when their work was marked by humans?
~~~~~~~~~

The Ed Sullivan Show ran in black and white from 1948 to 1965.  For those of you who remember Beatrice Lillie, click here (.52 - 3.20)  to enjoy a youTube capture of her appearance on that show singing  "There Are Fairies at the Bottom of Our Garden," (or read the words here first and click later.) Exit the tab above the youTube page to return.

There are fairies at the bottom of our garden!
It's not so very, very far away;
You pass the garden shed and you just keep straight ahead--
I do so hope they've really come to stay.
There's a little wood with moss in it and beetles,
and a little stream that quietly runs through.
You wouldn't think they'd dare to come merrymaking there--
Well, they do.  (Yes, they do.)

There are fairies at the bottom of our garden!
They often have a dance on summer nights;
The butterflies and bees make a lovely little breeze,
And the rabbits stand about and hold the lights.
Did you know that they could sit upon the moonbeams
And pick a little star to make a fan,
And dance away up there in the middle of the air?
Well, they can.  (Yes, they can.)
There are fairies at the bottom of our garden!
You cannot think how beautiful they are;
They all stand up and sing when the Fairy Queen and King
Come gently floating down upon their car.
The King is very proud and very handsome;
The Queen--now you can guess who that could be
(She's a little girl all day, but at night she steals away)?
Well -- it's Me!  (Yes, it's me.)

Rose Amy Fyleman wrote the poem, "There are Fairies at the Bottom of Our Garden" and it appeared in the Child Craft Books in the 1950s.  The poem is so well-known because it was set to music by English composer Liza Lehmann and sung so charmingly by Miss Lillie.

I would  like to feel a breeze, made by butterflies and bees -- and sit upon a moonbeam.   Wouldn't you?


In a way, my haven grew old with me, and that's a good thing.  Did you ever have a secret haven in your life?

Reply below as a comment.
Posted by Chris Antenen at Friday, January 10, 2014