My family laughed when I said "Window seat, please," when making airline reservations.  They didn't understand or agree, and they either tolerated or dreaded flights.  My daughter Amy and I liked to go on short vacations together, but she didn't like to fly and she swore that while that plane is nose-diving into the sea or crash landing into some field, she'd be looking at me and saying, as we're plummeting downward, "See, I told you this would happen."  Then I guess 'Boom' or 'Splash,' and she got the last words, which were "Large pieces of metal have no business flying through the air."

All that aside and in reality, I'd suffer all the indignities of shoes off, detection wand, long walks through the terminal, and endless delays,  just to get on that airplane and 'take off.'   I'd close my eyes and feel the lift, then watch the clouds or a starry sky, thrill with turbulence as my neighbors gripped their seats.  I would munch on the stale peanuts and sip the bottled water with joy, relish landing as if I were a bird gripping a branch.  If I could have hung out the window, I would have.  Born thirty years later, I'd have tried to join a program to go to the moon.  I wrote a poem called Ego Trip years ago about flying from Atlanta to Chicago.  It's a journal entry this week, and if you don't like poetry, don't bother.  It's a long, narrow poem, and it's more about my love of flying, and flirting, and especially airports. (Click HERE for the poem,  journal entry 01/17/2014.)

In my sixties, approaching my retirement years, I made a list of all the things I'd never do again: hang wallpaper, lay carpet, paint woodwork, answer a call for a job gone bad at 3 a.m.  I wanted to put 'cook' on the list, but that was impractical, since we have to eat.  It was a fun list to make because I really meant it, but it wasn't long before I realized that it was also a silly list and that the one I should be making was the list of things I wanted to do - or do again - visit the Empire State Building, make a quilt out of all the fabric I've been clipping for fifty years, sing in a choir, fly an airplane, finish reading all the books on my Kindle, publish my poetry, help build a house in New Orleans, and make Baked Alaska.

Some of the items required travel and others I just can't do, like sing in a choir again, or wield a few tools on a Habitat house in New Orleans.  I thought flying was out, too. he Baked Alaska was easy, but it required sponge cake which I made from scratch, meringue from about eight egg whites, and vanilla ice cream.  This picture using strawberry ice cream is all over the internet and the only picture I could find that truly shows the cake layers. My recipe, from my very old and stained, New Joy of Cooking, Rombauer and Becker, 1952, calls for baking it after it's put together.  The preparations took me all day, but I had good friends to eat it with me that evening after it came out of the oven, so it was a delightful wish to fulfill.  For someone who  doesn't like to cook -- what's one day?  I just might do it again

Since I made my list, the movie Bucket List, with Jack Nicholson and Morgan Freeman came out in 2007 - watch the trailer here -  but I  think many people have been making bucket lists for years. And there's another movie about 'not long to live'  called The Last Holiday, with Queen Latifah. Watch that trailer here.


Several years ago when she was approaching eighty, my sister Louise asked me to drive to Minnesota with her.  She is fourteen years older than I am, had lived in Minnesota close to most of our relatives when she was growing up, and she had visited them many times since.  I grew up in Illinois, so I didn't know them.  Travel wasn't easy in those days during and after the depression.

Louise wanted to go one more time!  Of course we went and had a great time.  Wasn’t that a one-item bucket list for my sister?  And a bonus for me.  We saw things I had never seen, the house where my dad grew up, the blacksmith shop of my grandfather, horse shoes implanted in the small cement blocks that led to the house.  My sister said it looked the same as years ago and I'm so glad we fulfilled her wish.


At about the time I made my list, yes, an actual list on paper, my son married a lovely woman who listens.  I didn't even remember telling her what was on my lists, but I must have done so, because for my seventy-fifth birthday, I received from my son and daughter-in-law a receipt for a flying lesson at Ben Epps, our local airport. Amy had done everything but schedule the lesson.  My son and my husband had warned her that  I wouldn't like it, but they’re probably white knucklers when they travel by air, or else they sleep or read the sports magazine they picked up in the airport.  When I fly, not only am I happy, I also  buy The New Yorker, so I have the appearance of the sophisticated traveler.  But the Amys,  my son's wife Amy and my daughter Amy, knew I would love that lesson, even though neither one of them would.


I couldn't wait to cash in that receipt, but I wanted it to be fun. From experience, I know that sometimes young men have trouble relating to really old women - yes, I am -  so while we were on the phone making arrangements for my flying lesson, I asked him if he had a sense of humor and told him my age and that this was something I had always wanted to do.  He understood.  A Georgia Tech graduate, he had decided in his senior year that he didn't want a desk job, so he went for flight training in Florida and was just beginning his career in the air.  I envy him, and yet I'm satisfied.  I don't even remember his name, but he was just the right person to give me a flying lesson. 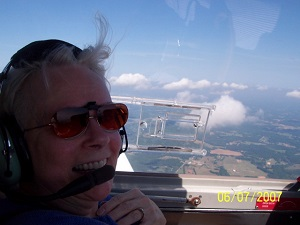 So. . .  tears form in my eyes just writing about this . . . . on one beautiful June day in 2007, I sat in the pilot's seat in an Eclipse and 'took off' over Athens, flew into some fluffy clouds, saw the bluest sky I've ever seen,  looked down on the UGA stadium in the middle of town, flew over the lake where my son and husband fish, felt the thrill of taking off and the let-down feeling when landing, and I was lucky to fly with a young man who understood why I wanted to do this.

I can close my eyes and remember being in the air, moving through it, what it felt like to look at that dashboard, hold that stick, and fly that airplane -- even though the pilot was doing the real flying.   I could look down and see the earth and a magnificent horizon,  look up and see endless sky, scattered clouds, and move through all that space between.