One of the things that causes me stress is finding places in Athens, Georgia.  I have mastered the idea of streets and numbers, but in this town, I have no idea where they begin, how intervals are determined, or why numbers are not prominently displayed on all doors and/or windows of said numbered structures.  I look at maps and am amazed that any of us get to any destination without major hits to our self-esteem.  Mail seems to find its way to these places, but I suspect postal workers of being psychic.


Because I love this city, I'll work it out, but to present a recent situation, let my goal be described simply. A year or so ago,  I wanted to have my vacuum cleaner repaired and I found a repair shop listed in the yellow pages at 2000 West Broad Street.  Being a resident of Athens, I was lucky enough to know that West Broad Street  has two other names -- Atlanta Highway and Business Route 78 -- but let’s just say that I discover that by reading an Athens map.  It does not tell me where 2000 is, so I am left to guess or deduce.  Again, being a resident, I know some places of business on West Broad Street. 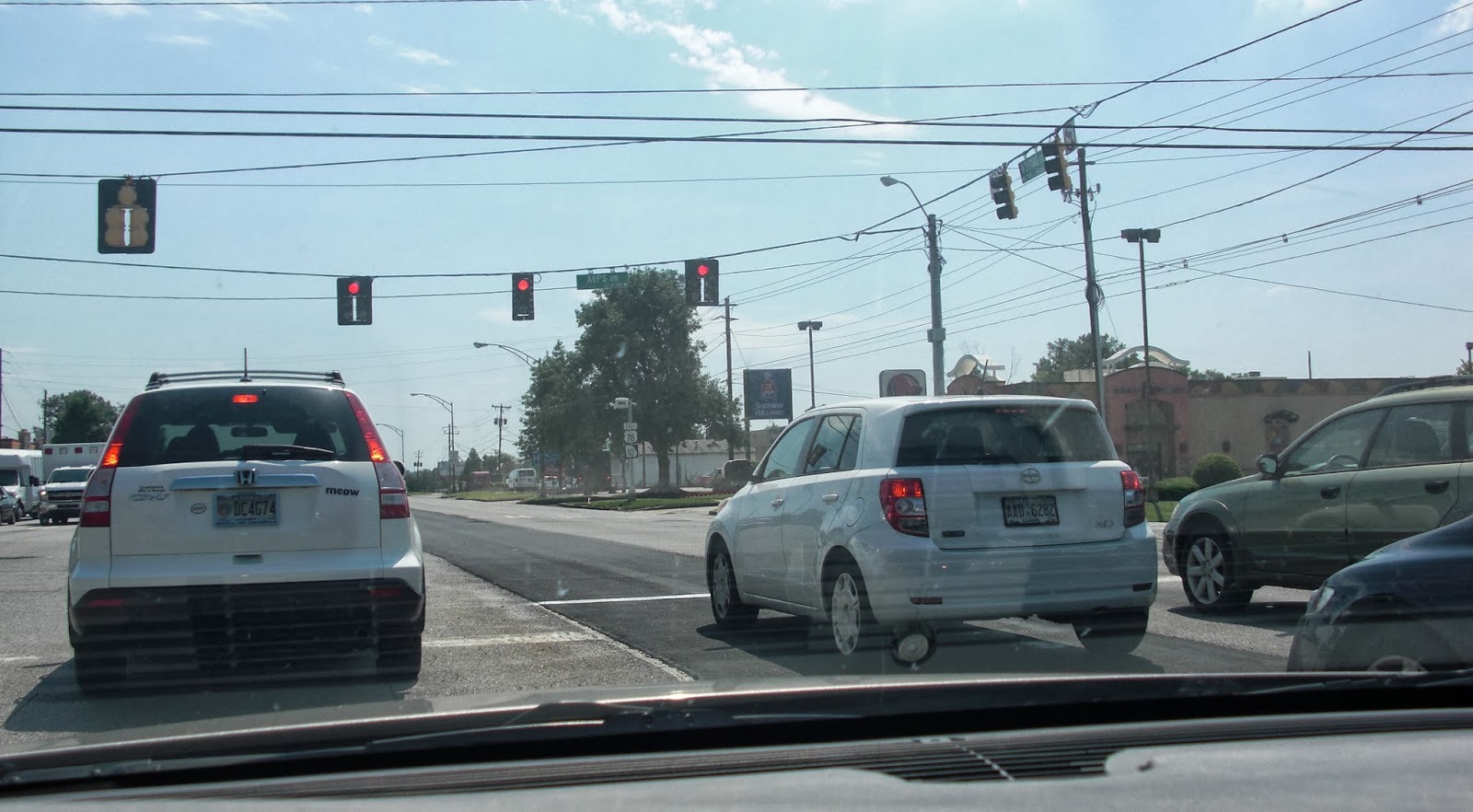 Preparing for my trip, I use the phone book to look up the Hilltop Grille.  It’s  at 2310, a great place to eat.*menu     (* click on the word 'menu' for each restaurant's bill of fare.)  I have also anecdotally learned that even numbers in Athens are on one side of the street and odd numbers are on the other.  It’s a catch-as-catch-can fact, but it’s a place to start.  Now I am able to deduce that the vacuum cleaner repair place is on the same side of the street as the Hilltop Grille.  I know another place on that side of the street because I looked it up in preparation for this jaunt.  The Red Lobster is at number 1956,  great cheese biscuits and seafood.*menu   I guess the vacuum cleaner place is between Red Lobster and Hilltop Grille.  However,  there’s a major intersection there connecting Alps Road/HawthorneAvenue and West Broad Street/Atlanta Highway/BusRoute78. Many streets in Athens abandon names like gum wrappers.  What lane should I be in?  I’ll just stay to the right so I can look for numbers.

There's the Red Lobster sign.  It must be just past here.  Oh, no, I’m in the right turn lane.  I should have been paying more attention.  Oh, well, I’ll just turn the corner onto Alps Road/Hawthorne Avenue, stop at Walgreens around the corner and work this out. (Never mind the surveillance camera that’s winking at me from the intersection post.)  From the parking lot at Walgreens I have to make a left turn onto Hawthorne Avenue in order to get to the left turn lane on West Broad Street to go back toward the Red Lobster.  I forgot, I can’t turn left there and that thing is still taking pictures.  I’ll just go on down to Baxter Street and turn around by Chili's,*  menu  great quesadillas,  or into the Alps Mall.

I’m turned around now, after a traffic jam in the parking lot by the new Schlotsky’s.* menu  No time for the original on whole wheat, because they’re digging up some kind of utility line. Now I have to wait for the Baxter Street light to change so traffic will slow and I can make a right turn onto Alps Road into the left turn lane.  Then I can get back onto West Broad Street/Atlanta Highway.  When I get to the intersection, (pictures again) I wait for the green left arrow and turn.

I’m in the outside lane now looking for numbers. No numbers for two blocks.  There's Hilltop Restaurant , 2310.  Okay, (sigh) it must be back there on the other side of Alps Road/Hawthorne and West Broad/Atlanta Highway/Route78 intersection.  Okay, no problem, turn right into first intersection with a light, go in a short way,  turn around and come back out to make a left back onto West Broad Street/Atlanta Highway at a light.  Good idea!

ONE WAY?  What does that mean?


One way, oh, one way.   I drive several blocks one way through a neighborhood of condos and am finally able to turn out onto the highway (you know the one) but there’s no light here,  so I chance it and make the left turn with only a couple of honks and a finger.

I’m getting to the intersection now.  See, ABC liquor on my right now is number 2303.  I was right.  Odd numbers on that side.  And just as I’m congratulating myself for this bit of sleuthing, BAM, my 2003 Buick Park Avenue (Ultra) has rear-ended a big green Explorer.  Blasphemy uttered and forgiven by self.  We get out of our cars.  More honking and some unbelievable blue words out the window of a little red Honda.

The policeman comes.  He’s very nice, and my Explorer driver is nice.   I have white hair.  Most people are nice to me.  Twenty minutes tops in the middle of the road.  It’s narrowing in on the time for me to pick up my grandchildren, my vacuum cleaner is still in the back of my car, and I now have a ticket to pay with probably an increase in my auto insurance rate, which hurts even more because I'm 'older and have more insurance.'

However, I’m nothing if not focused.  I ask the nice policeman if he knows where the vacuum cleaner repair shop is.   He says, “Sure, ma’am, it’s just over there by the ........”  He looks at my glazed-over eyes, which say to his experienced psyche, “Senior citizen doesn’t have a clue,” smiles, gets on his motorcycle, and says, “Follow me Ma’am.”

I could end there and let you decide whether,  given the way my day had been going, my vacuum cleaner was left at the repair shop and I was able to pick up my grandchildren on time, but I have other ideas for you to contemplate.

I drove 54 miles trying to find the repair shop, at 22 miles per gallon, that’s almost three gallons of gas.  It makes no sense for businesses (or homes) to print an address in the telephone book, on an invitation, summons, brochure, magazine, flier, or any other type of notice or advertisement and not post it on the property.   If I weren’t so busy looking for places, I’d draw up a map of Athens/Clarke County with streets well defined and the numbering system explained.  Maybe someone has already done that and maybe some of you were born with an inherent knowledge of plats and lots and addresses and a sense of north, east, south, west.  I wasn’t.  I’m directionally challenged and lucky to have left and right figured out.

I’d like to suggest that any owner, or representative of any structure with a door, be required to place, in print large enough to be read by the driver of a car going 40 miles per hour, a number which exactly corresponds to the number listed for that structure in written material intended to define the location of said structure.

Give a nod at thanks to time passing.  I wrote this before GPS came into use and before the Athens/Clarke County people of influence decided to place numbers and directions (e.g., W Broad Street 100-500) on some, not all, street signs.  Rest assured they won’t be on any of the places you or I need to find and I don’t have a GPS in my outdated Buick.

I bought a new vacuum cleaner,  my grandchildren forgave me for being late and breathless,  I still have my 2003 Park Avenue Buick (Ultra) 67,000 miles, and I didn't get the anticipated traffic summons from the many pictures taken at the Alps Road/Hawthorne Avenue and West Broad Street intersection.  People are nice to me.  It's the white hair.

Ever been lost in Athens?