Since I was old enough to breathe, I've not liked to do things without a purpose. Case in point: I don't like to ride around just for the sake of riding around.  One time with Wayne's parents, we drove to St. Augustine, Florida from where we lived in Gainesville, Florida -- about an hour.  I assumed we would want to get out of the car, look in some shops, maybe have coffee, talk about what we were seeing, but no.  We just drove there and back.

I feel the same way about looking at other people's 'slides.'   After color film was easily available, everybody who took a vacation had 'slides' they brought back - slides!!.  They would rent or own a  projector and show endless pictures of mountains or farms, frequently Yellowstone National Park, and occasionally people. So boring. I can see better pictures in a book if I'm interested. Pictures of people are preferable, but not if it's one person here and here and here and here.  My brother-in-law, Lowell, teases me by telling me how many slides he has to show me.

When Amy was about 10, she went to Denver to visit her Aunt Alice, Uncle Dick and her cousins. Those were the days when one dressed up to go on a plane.  Probably the last time I ever saw Amy in a skirt except for her wedding.  Tennis shorts  and barefoot all the time -- even in winter.

And oh, how she loved that little brother. 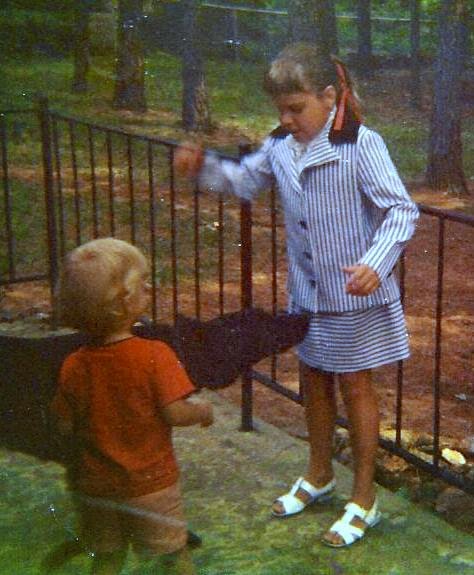 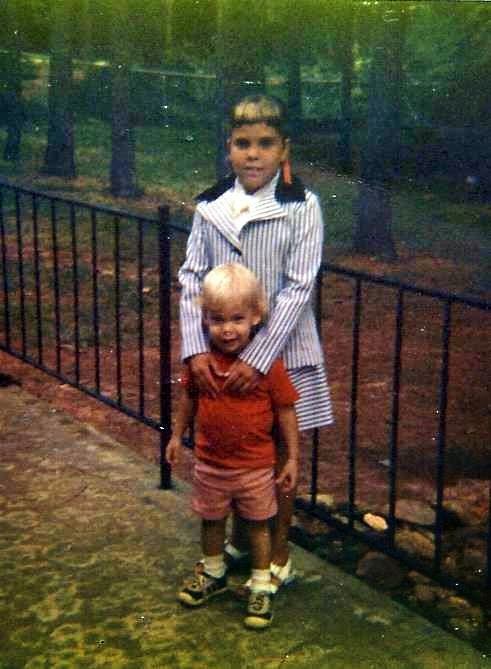 She took her camera, and when she got home we were anxious to look at her pictures.  All mountains, no pictures of her, Aunt Alice,  Uncle Dick, her cousins, just mountains. I'm afraid I was a bad mom.  Instead of looking at the way she took the pictures and how skilled she was, I just said,  "No People?  You didn't take any pictures of people?"  It's so easy to do the right thing later, but always difficult to do it when it counts. I let my feelings about 'vacation photography' get in the way of reacting positively to my daughter.   I'm afraid I'm often guilty of that quick judgment thing.

A few weeks ago, I had lunch with an old friend.  We've been trying to get together for months. We worked in the same department, Financial Information Systems at UGA. Becky had two boys about the same age as Wes, so we had a lot to talk about back then, although I don't think we solved anything.  The boys were all in their late teens or early twenties.  Difficult years for young men -- and their mothers.

This time at lunch we talked about our families, about work, because she retired a few years after I did, but we knew the same systems, the same people.  I knew she was into photography in the same way I was into writing, but I didn't know how extensively she had traveled and that she had a web site with her photographs, had entered some contests, etc. Becky, not knowing my aversion to looking at 'slides,' gave me her card with the URL on it when I asked her how to get to her site.

I entered her world  with some trepidation.  But all that went out the window.  Yes, she has taken some of those 'perfect' photographs that might be used for a postcard, or to illustrate a book, and believe me they are perfect, balanced, colors exquisite, all that, but the ones I like the most are the odd ones, pictures you wouldn't think would fit. There's one of  cave dwellers' homes that I can still see in my head.  Those caves go back centuries,  The same place in Turkey is into hot air ballooning.  Of course I looked it up.  That's what I do!  Also there were some unusual photographs of  and over water. Becky seems to like to photograph water when it is mirror-like and reflecting something. Beautiful!  Some of them remind one of impressionist paintings.

She has an anonymous quote on her online pages:  "Nature sets before us a banquet of things to celebrate . . .  every day."

Evidence of the banquet she sees comes forward in all of her photography. The ones I liked the most are the flowers and birds, where you give the picture a second look, because at first glance it looks off balance, not a perfect picture of a flower or a bird. Then when you look closer, you realize she was going for the unique quality of a certain part of the bird or flower, its center, how the light plays on it, or a shot of an insect that has alighted for a brief moment.  In her pictures of  humming birds, you can hear their wings, but you have to listen carefully.

So from being a skeptic, I've become a fan.  Becky has traveled extensively and used her camera to capture some  amazing stuff.  I don't know how many awards she has won, and I wouldn't know what they mean, anyway, but she has listed them on her site, so those of you who know about photography can find them.

She has shown certain photographs locally.  That's where I first found her work.  She had shown them at a summer art display at OCAF, in Watkinsville, where I meet with a writing group every Wednesday.  We got in to the exhibit for a few minutes one evening before group because they were late closing it.  The museum is usually closed when we get there at 6.


It was not an exhibit of photography, but an art exhibit. Everything was there; but I remember oils, sculpture with various materials, water colors, and photography. I was drawn to Becky's immediately and surprised when I saw the name on it. I had to get in touch with her and tell her how much I enjoyed it.  Even then I was skeptical -- after all, one picture?  It's still a favorite, but now I have more than one, and I go to AKINIMAGES to see if she has something new or I missed something.

Go to visit her site.  You will be so pleasantly surprised at what you find there.  I don't know if she sells them or not, so for that, you're on your own.  The first one I saw still sits there in my mind as an amazing piece.   What do you call art work like that?  I want to say 'picture,' but the word seems too mundane.


From the main page, select her portfolio and look through the ones that interest you. They are arranged so well.  There is an ordered collage for each part of the portfolio, but if you click on one of the photos in the group it enlarges and presents you with a slender arrow to go to the next photograph on that particular carousel.

I was most interested in the birds and flowers and was never disappointed.  She also has photos from her travels. I don't find myself hurrying through these photos either. I'm amazed at my impatient self slowing down for Becky's work.

Below, I've noted some special works that I like, but you can just go HERE, or cut and paste here  http://www.akinimages.com and proceed from the home page.  Then forget about what I have written below.  I promise you won't be disappointed however you use Becky's Images, but be sure you see water and reflections, and don't miss the wildlife section.  I couldn't even identify the orangutan until I looked at the enlargement.

The birds:
There's a bow-legged egret, the egret pulling on a stem, the ruby throated hummingbird with his bill all the way into the flower.   Go to one of these sites and then go through page to page on the carousel.  Her photography of birds is amazing. One looks as though he's coming right at you.  To start your visit with the birds, you can pick birds from the portfolio dialog box of choices, or you can jump right in HERE to start with the hummingbird (http://akinimages.com/birds/#jp-carousel-404) 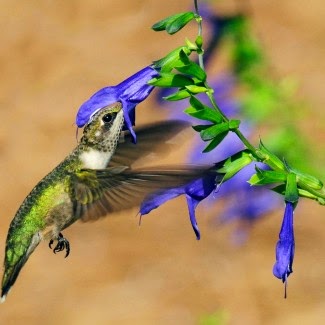 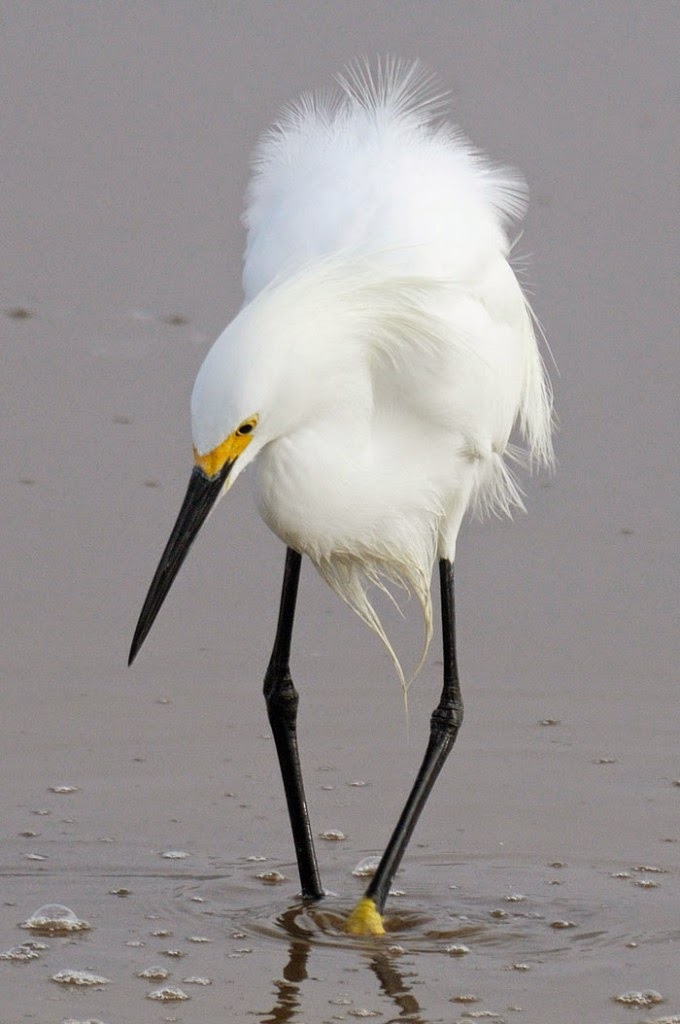 Be sure you look at the black-necked stilt HERE (http://akinimages.com/birds/#jp-carousel-423)   I could look at him for ten minutes and continuously find something new, in fact, I did.

and the flowers:  Go HERE  (http://akinimages.com/flowers/#jp-carousel-468)  to see the back of striated petals on a morning glory with a small visitor peeking above the bloom, or look at this bloom,
then get on the carousel to see the rest by clicking one of the slim arrows to take you left or right. It's worth stopping at each one to see why Becky selected it, this certain picture to take, keep, display - I'm sure she has many outtakes, but only one was selected to represent the reality she saw.


Be sure to go HERE   (http://akinimages.com/miscellaneous/#jp-carousel-567) where you can see a lovely autumn path in Canada and a window from the Jekyll Island Club Historic District Millionaires View.  Everything is so old and elegant there. Sometimes I think shabby elegant should be the phrase, and shabby should be a good thing, indicating the process that used to be common, elegant or not, to use a thing until it's no longer usable.   That's the feeling I once got when I drove around in the Millionaires Village, and ate at the Radison Inn, but it's been a number of years since I've been there.  I think it's the Jekyll Island Club now. 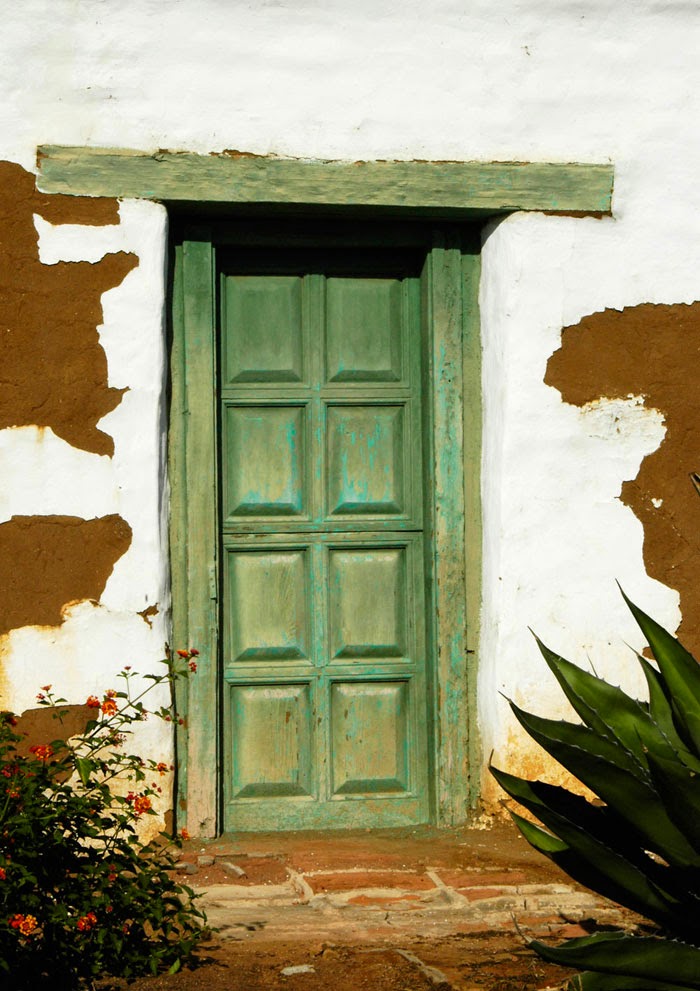 she really means it, a menagerie mixed with tree bark, a door in San Diego, and a skyline trail in Canada.

On the Greece and Turkey carousel I found the photo I liked so much, The Whitewashed Stairway in Oia, Santorini, Greece.   I have a feeling I won't be able to google that, but I'm going to find the Cave Dwellings in Cappadocia, Turkey.

Have a wonderful trip through Becky's images, and don't get caught in the spider webs.
Posted by Chris Antenen at Friday, October 03, 2014