I don't know where I found this empty piece of sheet music,* (be sure to read this footnote if you want to know how gullible I am) probably on Facebook, or Tumblr, but the score caught my eye because that's what I posted on my blog in November, the sound of silence.  It was a bad month, beginning on October 22.

It's December now.  We did have Thanksgiving here in November with Wes, Amy, Emma, and Charlie, and nobody fell down this year. 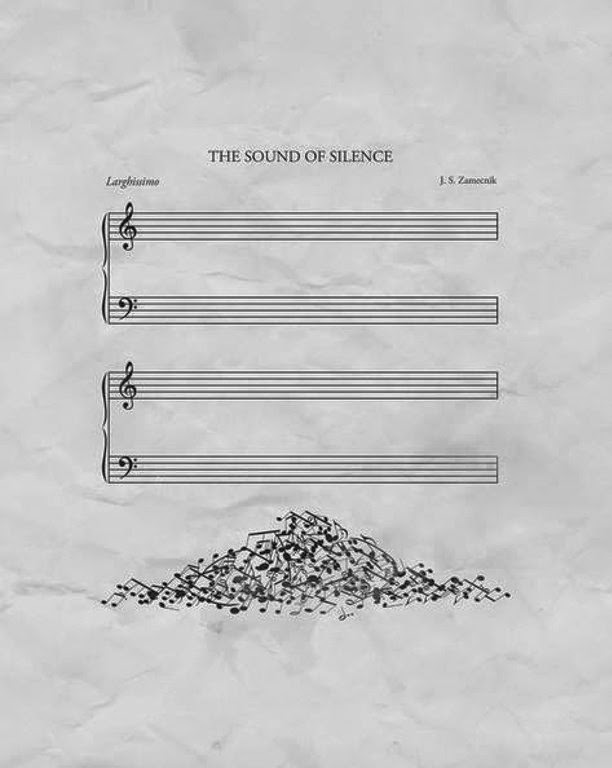 To see if I could find something about this empty score,  I looked up larghissimo and J. S. Zamecnik.

larghissimo
the Italian superlative of largo
(musical notation being as slowly as possible, just as musical notation for largo means slow)
John Stepan Zamecnik:
In the early days of the movies - seems so ancient with the explosion of films available to us now -- the photographic element came before sound.  So the movie-houses showing these silent films sometimes had their own sound, an organ or a piano, with the talented or not-so-talented performer deciding what type of music to play - somber, lilting, angelic, or as you can play in the samples -- gruesome, or stormy.  No talking, just sound used with the film.  When specific music was chosen or written for a silent movie, it was called photoplay music.

J. S. Zamecnik was born in 1872 in Cleveland, Ohio and studied music at the Prague Conservatory of Music under Antonin Dvorak in the 1890s and then came back to the United States to spend a  forty year career composing and creating cue sheets for silent movies.  These cue sheets were for use by the local theater owners, who hired the musicians to accompany the silent movies.

In the early years they relied on classical or current music mixed with some improvisation by the musician providing the accompaniment for the movie, usually a local pianist, organist, or even an orchestra, sometimes made up of only two musicians.

There were three types of scores for the movies; improvisational  - the musicians played whatever they thought was appropriate to the scene in the movie as described above; compiled - cue sheets listed the already composed music and showed the musicians (piano, organ or orchestra) what to play and when and how to play it; and original - scores written specifically to be played throughout a particular movie.  J. S. Zamecnik used the latter two, either providing cue sheets for already composed music, or creating an original score for the movie.

Samples of photoplay music can be found  HERE
http://www.mont-alto.com/recordings/GruesomeTale.mp3

By the way, yes, this was even before my time.  I saw the silent movies the same way you did, and when I went to a 'picture show,' they may have sometimes been black and white, but the people talked.  The main difference was the price -- ten cents plus a two-cent luxury tax. ( A bottle of nail polish was also ten cents, plus a two-cent luxury tax.)  Those were the days!  I guess.  There was always a newsreel before the movie and a cartoon shown in color after the movie.

And then there were the Saturday afternoon adventure serials for the kids.  I went to one, and a man was left on a cement ledge being pulled by chains to crush him against the wall.  They always left their patrons dangling, literally it seems, so we would be sure to come back the next week. Didn't have the 12 cents the next week, so he was surely crushed against that wall.

It seems that The Sound of Silence, as you suspected, is an original recording by Simon and Garfunkel.  The graphic I used was created by John Tibbott  [CJWHO™ (The Sound of Silence by John Tibbett Gallery. . . . NOT J. S. Zamecnik, and was used by  Threadless as a decal for men's and women's T-shirts in all sizes . . . . . . . . . . buy T-SHIRTS HERE .  To quote Mr. Tibbett, if you can get past my quotation marks:
"ABOUT "THE SOUND OF SILENCE" by QUICK-BROWN-FOX
Simon & Garfunkel are stupid: they sung [sic] and played guitar all over that tune (changed the composer name to silent film music composer J. S. Zamecnik in case of copyright infringement)"