REMEMBERING
I just reread Ashley's post HERE about remembering her dad, riding around with him on weekends, stopping for hot dog fixings, and cooking them in his vet clinic with makeshift heat and the mustard and catsup that were stored along with refrigerated medicines. She was treasuring her memories of her father, who died recently, and wondering what her children will remember.

I've been working hard writing about my dad's life; most of it from memory, but for me it's a long trip back. I was twenty-seven when he died. I still have memories, but they're not as recent nor as fine-tuned as hers. Mine are more like reminiscences, wisps of memories, small things that come back to me in pieces. He didn't laugh much, and yet he was happy and joking most of the time. I don't know. Maybe he was the show and I was the audience. I know he held my hand anytime we were in a crowd, or even in a place that was strange to me.

I know he shaved with a straight razor every morning, sharpening it on the strop that hung beside the sink, making shaving cream in a cup with a special brush. He would wink at me as he swirled that brush over his cheek and under his chin. At the end of the day, his cheek would be rough with whiskers. I remember how he sat in the leather upholstered rocking chair next to the radio and the bridge lamp, how he held his head back so he could read The Daily Register Mail through his bifocals, and how he never minded if I crawled onto his lap.

That started me thinking of my children's memories, but two of them died before me, so Wes will have to do a lot of remembering. I close my eyes and what I see is Wes running in the front yard , dodging trees, trying to catch that football Amy threw. As in tennis, she had a good arm, but just as Lucy would pull the ball away right before Charlie Brown was ready to kick it, so Amy had her own Lucy move. She graded him on all of his catches and she would never give him above a B. He tried through at least one football season before he realized that the A would never happen. They called each other 'Bubba.'

His memories can't include the day I tried the 'no supper until you pick up your toys' on Julie. We were still in Florida, so she was probably about six years old. That didn't even sound like me to me and I took her a glass of milk at 9pm. The room still looked the way it had before I gave that ultimatum. Wes can't remember her teacher at the University of Florida kindergarten. One day she said to me, "I always have one little girl who stays clean the whole day no matter what she does. And this year, that's Julie." I looked down at my clean little girl in a pink dress and clean white tennis shoes. I could only smile at Miss Swett. I didn't want to burst her bubble by telling her what Julie's room looked like at home.

Wes's memories of Amy are probably varied, a range from fun to sadness. He can't remember the day Amy totaled up her collections for the Green Acres swim team to $140 and he can't remember the day she stayed home from school because she was sick and sitting in the family room with me watching Phil Donahue who had as his guest the woman who wrote The Bereaved Parent. As we watched this program together, Amy told me about some of her fears after Julie died, how she had cried for me because I was sad, and how much she still missed having Julie in her life. She was twelve, eight years after Julie died, and it was still real enough for her to grieve. I don't believe Amy ever recovered from that grief, and yet the one thing that everyone who knew her talked about was remembering her smile, and her ability to make others laugh.

Not too long before she died at age forty-eight in a car accident, Amy told me she had decided she was mad at Julie. Oh, how I understood. Grief comes at you like a whip, hitting you in places and at times you couldn't imagine. You know you're not alone, others have felt grief before you, but it feels so lonely there in the middle of it. Nobody's grief is the same as yours, just as nobody's smile is the same as yours. You'd like to find someone to hand your grief to. "Here, hold this for me, just for a minute, will you please?"

Wes can probably remember the night Amy took him to watch the fireworks on the other side of town on July Fourth after a pool party. They didn't tell us they were going and hadn't counted traffic into their plans, so they left some scared parents behind for a couple of hours. We should appreciate cell phones now. 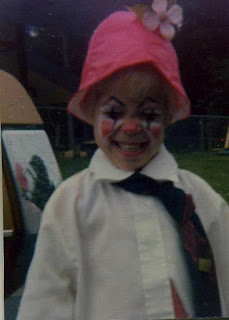 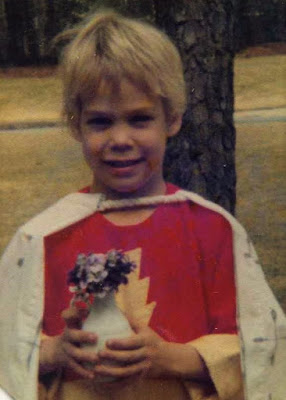 What will Wes remember? Dressing up as a clown for nursery school? I think Amy was the makeup artist.

Picking flowers for me dressed as Spider Man? It's amazing what you can do with an old sheet and a magic marker.

Wes will be forty-five tomorrow.

Will he remember that summer afternoon--dressed in his Superman clothes--talking to a policeman who was investigating a burglary in the neighborhood? That scene in our family room is implanted firmly in my memory: Wide-eyed Wes sitting on the edge of a chair, the big yellow S on his chest, a bright red cape hanging behind him, dirty white sneakers swinging a bit nervously against the chair. A young policeman--uniform, gun in holster, clipboard poised to take down Wes's statement about the man he saw go into the house across the street where the burglary occurred. According to Wes, the man had something shiny on his belt. A gun?

The poor policeman was hardly able to maintain a straight face and I didn't dare look at him. We would have both lost it. He took down Wes's name, his address, the time he saw the incident. across the street. It was all official. The man Wes saw turned out to be another policeman and the shiny item was a pair of handcuffs, but for one shining moment, Wes was the center of a very important investigation. Take that Batman!

Wes could find precarious situations without even trying very hard. Will he remember climbing the althea bush (Rose of Sharon) that was almost a tree at the corner joining the house and deck, then jumping down (pardon me, flying down) wearing whatever hero's cape adorned his body and whatever dreams inhabited his mind for that day? On one occasion he climbed from the tree to the roof and was about five feet from the pole that held wires coming into the house from the high-voltage transformers above the street. Without even knowing what the danger was, I got him down safely that day and there were stern admonitions about roofs and wires.

But there was another day when I asked him to climb the drop-down stairs to the attic to get something for me, forgetting that the large exhaust fan was on and just a foot from the top of the stairs. Yes, he put his hand there and cut it. Not so bad that we had to make an emergency room run, but bad enough for me to feel worse than he did.

Will he remember the parachutes we made out of his dad's handkerchiefs for his super-hero dolls, and how he wrapped them just so and threw them into the air off the highest end of the deck? Will he remember the hook I put at the top of the basement stairs, so he could tie a string on it for those same super dolls to slide down? A makeshift zip-line? I found the hook before we moved in 1997, a bit of string still clinging to it. I put it in my pocket. When he finds it in my jewelry box, will he know why it's there?
Posted by Chris Antenen at Thursday, April 14, 2016